These were WIPs. I cut them out and embellished them a while ago, but didn't get around to adding the felt linings and stitching them together. I still need to decide on fastenings. 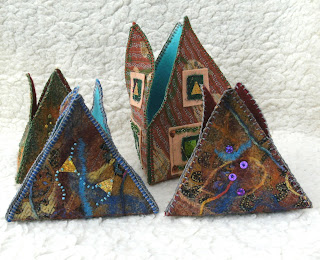 I'm taking part in Sharon B's Stitch Explorer Challenge. Find out all about it here. This month's challenge is Casal Guidi work.

I really like the combination of heavily stitched areas and pulled thread work in this technique.

I did this experimental piece for City & Guilds a while ago: 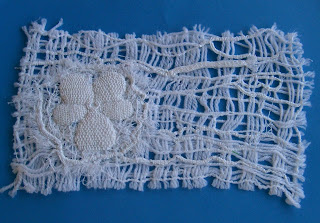 Instead of pulled thread work on linen, I made the background by winding fine knitting yarn around a square frame, top to bottom, then left to right, and machine stitched over it to hold the threads before cutting it off the frame. The thick 'stems' are worked in stem stitch over a bundle of threads, the smaller ones are machine stitched with a zigzag stitch. The flower motif was stitched over wadding.

I also made some samples on dyed evenweave fabric with coloured threads, but this white sample was my favourite.
Posted by kay susan at 5:57 PM 3 comments:

I knew I had a bit somewhere...

I knew I had another piece of experimental assissi somewhere, here it is: 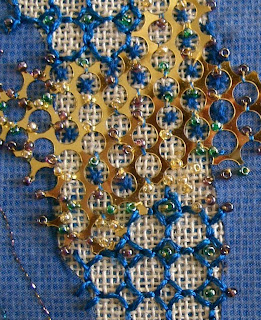 Canvas, with applied chiffon for the solid area. The voided bit is embellished with sequin waste, beads and stitch. Detail is added with blackwork stitches.
Posted by kay susan at 2:52 PM No comments:

Flying in the face of assissi work!

I'm taking part in Sharon B's Stitch Explorer Challenge. Find out all about it here.

This month it's Assissi Work. Traditionally, Assissi Work is done in one colour on evenweave fabric around a voided motif on white fabric.

I wondered if I could get the same effect using the embellisher machine. I started off OK, but then, as usual, the piece took on a life of its own and I just followed. Here's what it turned into: 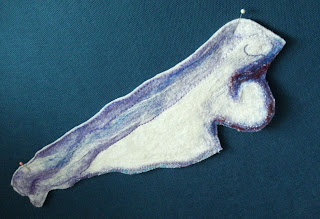 I began by needlefelting wool tops (roving) onto a dishcloth made of bamboo fibre. I was hoping that the holes left by the needles would give the appearance of cross stitches, to match the weave of the fabric. The plan was to make a shape appear in the middle then outline it, either with yarn needlefelted on or by hand in back stitch. I got a shape to appear out of the background, but then I decided to add some more wool in a lighter colour, to try and get the effect of the light catching the stitches. Two things happened: another, more appealing shape started to appear, and the bamboo fabric started to disintegrate. I put some white silk sliver over the top and this kind of flying bear appeared. I went with it, added some running stitch then cut it out. It resides on my noticeboard until I decide what to do with it!