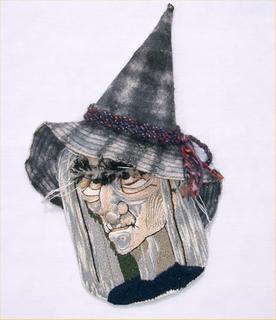 I was saving this for halloween, but I just posted it to Illustration Friday - Ageing. This was part of the design work building up to Doris. (If you haven't met Doris, you can find her in the archives for 2005-05-08). The other thing about it is I did it after I made the Opus Anglicanum sample, because I wanted to extend the technique of split stitching faces.

It is a 3D plaque. It hangs on the back of the door in my sewing room.

Here it is in closeup. 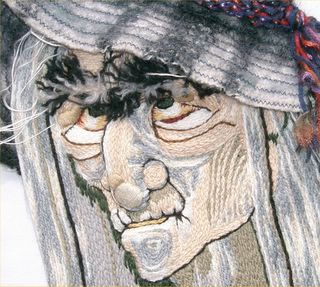 I used a piece of very pale coloured linen as the background. I transferred the design by tracing it through a piece of crystal organza and attaching that to the linen. All the embroidery is in knitting yarns using split stitch or satin stitch except for the eyebrows. The loose wisps of hair are threads withdrawn from the background fabric. The hat is cut from a felted wool scarf and is made in two pieces, crown and brim, joined together. The hat band is a kumihomo braid. I cut a piece of grey picture framers board to the outline shape and laced the embroidery on to it.

Not quite as beautiful as the work of the 13th Century ecclesiastical embroiderers!
Posted by kay susan at 7:41 PM 7 comments: Links to this post

I've been playing with my piece of multi-coloured fabric from the 'UFO files'. 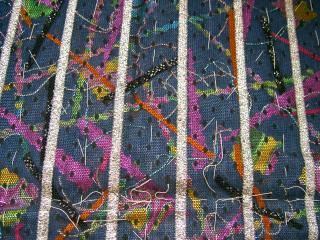 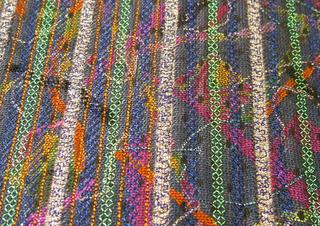 I've been trying out the pre-programmed quilting stitches in my machine, using rayon machine embroidery threads in blue and green. It didn't really come to life until I added the orange.

I plan to make a bag with it.

Posted by kay susan at 3:16 PM 3 comments: Links to this post 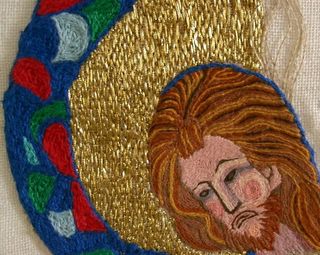 This is my version of traditional Opus Anglicanum work.

By the 13th century English ecclesiastical embroidery - Opus Anglicanum - was unrivalled in Europe. Embroidery was developing in the Church, at the same time as the associated work of illuminating manuscripts. The techniques employed in these embroideries were quite unique: couching in gold and silk for the grounds and representational figures worked in split stitch.

I didn't try to replicate the method using gold and silk. I used a piece of natural linen. The gold work is underside couching in jap gold and the figure is split stitch in flower threads. The coloured circle is worked in split stitch in one strand of crewel wool. I traced the face on to a piece of crystal organza, tacked it to the linen and after I worked the embroidery I cut off the surplus. (13th c. embroiderers would have used silk gauze).

I unravelled the linen threads around the embroidery and applied it to another, coarser, piece of evenweave linen that I was using as a sampler, using one of the traditional methods of attaching a 'slip', by weaving the unravelled threads into the backing fabric.

The design was very loosely based on the pictures in the Book of Kells.

I tried it because I was interested in the traditional techniques, but I wouldn't do it again! We have easier ways to do these things now.

Posted by kay susan at 2:24 PM No comments: Links to this post 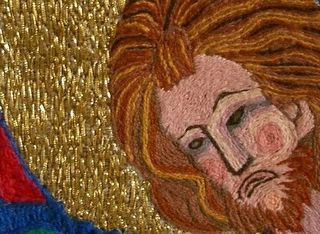 On the right is a shot of the sampler. It is a collection of traditional sampler motifs in cross stitch, some traditional crewel embroidery and stumpwork motifs in wool and stranded cotton, and the Opus Anglicanum piece.
Posted by kay susan at 2:23 PM 2 comments: Links to this post

Pink Lemonade - Tie One On

Here's my interpretation of 'pink lemonade' for Tie One On. This is the original sketch. It is Ruby and Em, all shopped out and enjoying a good natter over a glass of pink lemonade! (the lemonade isn't in the sketch because it will be an applique). 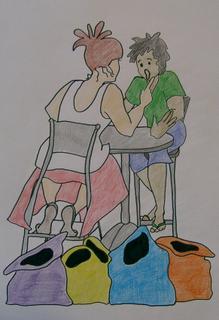 Here's a full length view of the apron. It is cut from one piece of canvas. I simplified and traced the original design and transferred it to the fabric using an iron on transfer pencil. It is painted with watercolour dyes and iron fixed. The outlining is stem stitch using stranded cottons. The fruit slices and the glass of lemonade are appliques cut out of those ever useful washing up cloths. I thought it looked too plain, so I added some bias binding stripes at the bottom. The ties are just plain old cotton tape. 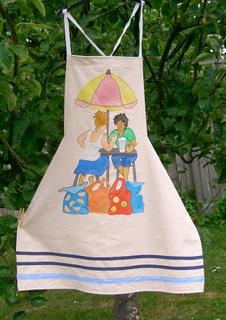 This is a close up view. 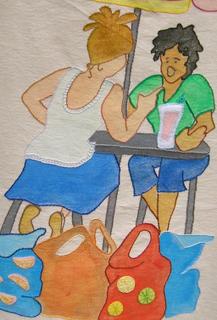 (click on photos for bigger image)
Posted by kay susan at 11:58 AM 7 comments: Links to this post

Back on the carpet! 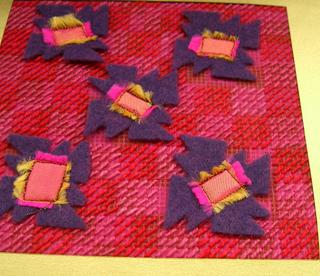 First I printed crystal organza by stamping an all over pattern of squares with a rubber stamp and red fabric paint. Laid it over canvas. The motifs are cut from a dyed wool blanket and embellished with a piece of frayed shot silk and stitched on. Half cross stitch in cotton perle. 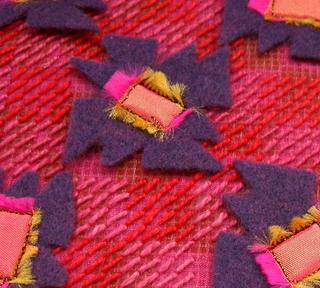 I've just been digging in the UFO drawer, so while I was there I photographed some of the worst offenders and put them in the appropriate place, Smockery - the UFOs. I am ashamed of most of them! 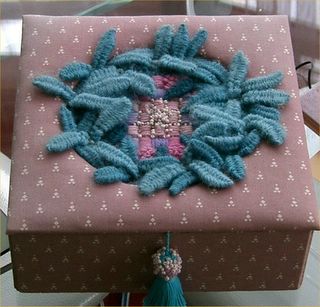 Box in heavy cotton fabric with canvas insert in the lid. Its a Laura Ashley cotton circa 1980. Its just the right colour and the pattern reminds me of clover, although I think it was called something else. Simple canvas work stitches in tapestry wool embellished with beads and needleweaving, with a beaded tassel to lift the lid.
Posted by kay susan at 10:56 AM 2 comments: Links to this post 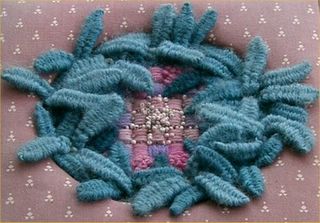 I did the needleweaving around a very large darning needle, but next time I shall try Chloe's safety pin method, much safer on the fingers!

http://chloesplace.blogspot.com/
Posted by kay susan at 10:54 AM No comments: Links to this post

This is all design work based on clover. 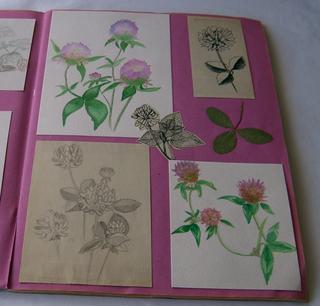 On the left, sketches and drawings in watercolour, pencil and ink.
Below right, more sketches and some design ideas for counted and freestyle embroidery. 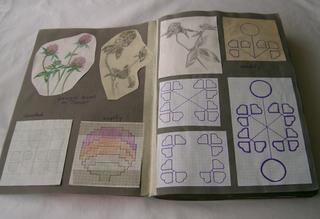 Below left, some more designs for counted work and some ideas worked out in tissue paper. 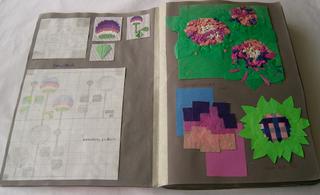 (click on photos for bigger image)
Posted by kay susan at 1:30 PM 5 comments: Links to this post 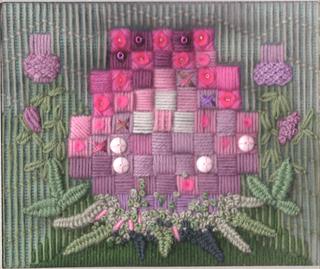 small gauge canvas, crochet cotton for the background and
cotton perles for the details. (click on photo for bigger image)
Posted by kay susan at 12:45 PM 3 comments: Links to this post 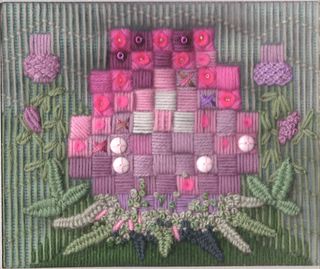 This sample was worked up and the resulting design is being used for a box lid.
Posted by kay susan at 11:21 AM No comments: Links to this post

WIP - carried away on a carpet 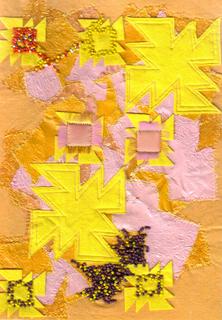 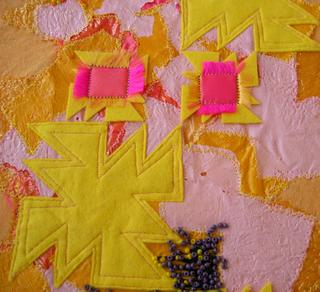 Above right, view of sample. The background is made up of pieces of melted pink and yellow plastic tablecloth, orange cellophane 'bubbled up' under the iron and shot pink/gold fabric all stitched to an orange dishcloth. The applied motifs are cut from a yellow dishcloth and embellished with beads and squares of frayed fabric. Above right, closeup view.
Posted by kay susan at 12:31 PM 3 comments: Links to this post

For all you apron fanatics

I've been working on my apron for July's 'Tie One On' - the theme is PINK LEMONADE. The boss says it is boring and I should find something more inspiring to do! I like it, so I shall carry on, but I've been racking my brains to try and come up with something revolutionary on the apron front. So far no success, but I did remember seeing something by Cindy Hickok. I trawled through the net and found the link, enjoy:

and here's another, its called 'Women's Wear:

and controversially, how about this, entitled Threadbare: Doesn't anyone sew anymore?

I couldn't find a bigger picture, but its so cool!
Posted by kay susan at 1:06 PM 5 comments: Links to this post 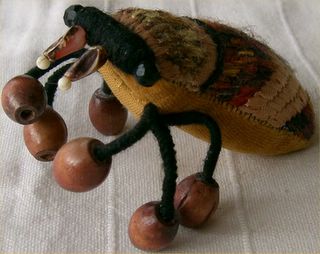 Here's the beetle I made for June Month of Softies. He's just oddments of yarn, canvas, velvet, wire and beads. He was really fun to make
Posted by kay susan at 10:30 PM 2 comments: Links to this post 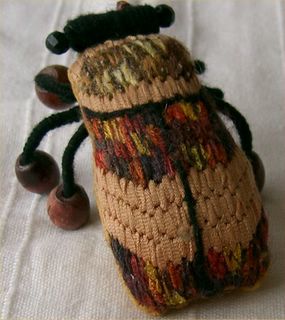 This is the back view, to show the canvas work. 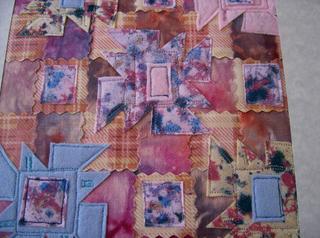 A slightly altered version of the original pattern.


The background is woven strips of gift wrap and space dyed muslin bonded to iron-on interfacing. The applied motifs are cut from dishcloths or dyed nappy liners. The nappy liners were dyed by marbling with ink and oil paint.