reminded me of something we did right at the beginning of our City & Guilds course as part of the Design Certificate. Our tutor made us spend a whole day making bits of mucky paper and I just couldn't understand why, or what it had to do with embroidery. I cut them up and kept small pieces of them, then a long time after that I made the samples , and then I understood!

These are one or two scrapbook pages showing my efforts. If you click on the photos to enlarge the picture, you should just about be able to read my brief notes on each piece. 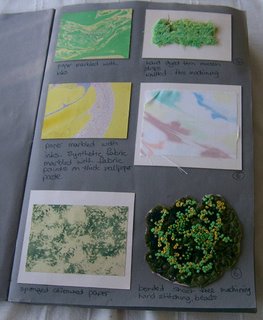 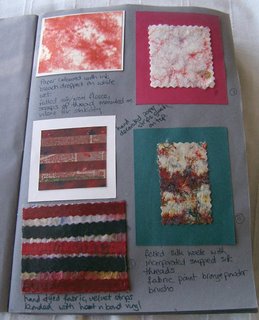 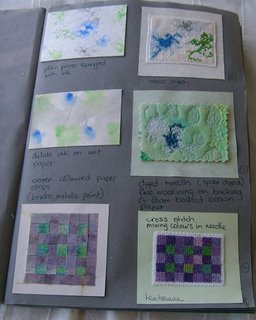 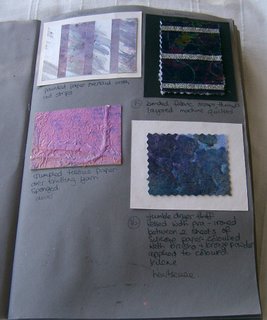 Well the children have gone home and I've put the house back together again. It's very quiet! I'm worn out from tearing backwards and forwards to the beach. Together we made cards and lollipop puppets and pipecleaner flowers to take home, but I had to take a break from my all-consuming passion, and now I have itchy fingers!!** I have nothing to post just yet, but I found this. I made it a long time ago, but it's sort of in the spirit of TAST. This was the first finished piece I did for my City & Guilds. We were asked to interpret a picture of a garden using the few stitches we had so far covered. At the time it was quite exciting! Elizabeth put a comment on an old post of mine, asking what I do with all the bits and pieces I make. (I don't know why, but the occasional old post pops up in Bloglines, I think it may be because now I am in the new Blogger I have been putting labels on them all).

I keep some of my favourite pieces in a portfolio Elizabeth, just in case I ever decide to carry on studying or join a 'group'. Other bits that I am not so pleased with, and samples, get chucked into a drawer and eventually get pulled out and made into some kind of a 'thing' or further insulted with paint, iron or heatgun.

I used to have lots of my pieces displayed around the house, but since we moved here, The Boss decided he wanted a cleaner, more modern look about the place and banned my bits and pieces because he said they didn't fit. (Actually, he said he wanted to ditch what he calls my 'early halloween style of decor' for something more respectable!). We have no picture rails in this house and the outcome would be somewhat unpleasant if I went around banging in picture hooks without a request in triplicate! (For those that know them, imagine something like an episode of One Foot in the Grave superimposed on Fawlty Towers and you are almost there!)

The smallest bedroom is mine, and I am supposed to keep all my stuff in there. But, of course, there is a trail of threads and snippets leading along the landing, down the stairs and into the living room - showing the way to my favourite sofa. Every now and again, I have to put all the bits I have got out back in the boxes and take it upstairs again. The Boss says he is living in the Lair of the Lunatic Housewife and it is like being constantly visited by a rampaging playgroup. He also says he likes it that way, because I am almost completely self-entertaining!

I have managed to sneak a few favourite 3D items into a spare glass fronted cupboard in the living room ( because I do like to look at them!) and the delightful Doris holds court on the upstairs landing, frightening the children when they come to stay.

and the walls of my room are covered in sketches and design work, just because it PLEASES ME! Its all silk, including the thread which is silk knitting yarn, needlepunched onto a piece of felted wool curtain interlining. I used three different weights of silk fabric. The lilac background piece (dress weight) is quite scrunchy, the circles feel quite soft (suiting weight) and the light coloured pieces (from a piece of very fine sari silk) feel really soft and fluffy. I like this. I can't decide whether to leave it as it is or carry on and embellish it.

Have you tried running silk under the embellisher asked Dale? 
Top left is silk needle punched onto felted wool. Top right is a piece of silk run through the needles on its own. The underneath is quite soft and the top surface is crunchy. The silk scrunched up to about half its original size. The bottom piece is strips of a contrast colour laid on top and the whole piece run under the needles. Great texture, and you can cut it up and it doesn't fray.


The silk I used was scraps of saris I got from a fire salvage sale.

While I had the machine out: 
I have a jar of cellophane sweet wrappers I was keeping for zapping with the heat tool (Quality Street, my favourite!). I wanted to know if I could attach them to fabric with the needle punch. You need to make a 'sandwich' otherwise the sweet wrappers just tear and split. I put a piece of felt on the bottom and a very fine layer of wool tops (roving) on the top, with the wrapper in between. The fibres felt together and trap the pieces of cellophane. So long as you don't punch it too much it works. Then I tried putting the sweet wrapper on the bottom and the felt on top, directly under the needles (top row). That worked too, so I didn't need to make a 'sandwich'. You get a nice sparkle from the cellophane when it catches the light. I don't know if you can see that from the photos. Sorry, it was the best I could do.


After I had done this, I discovered that Emmy had done THIS!


and if you haven't already, do check out Dale's embellisher blog at: